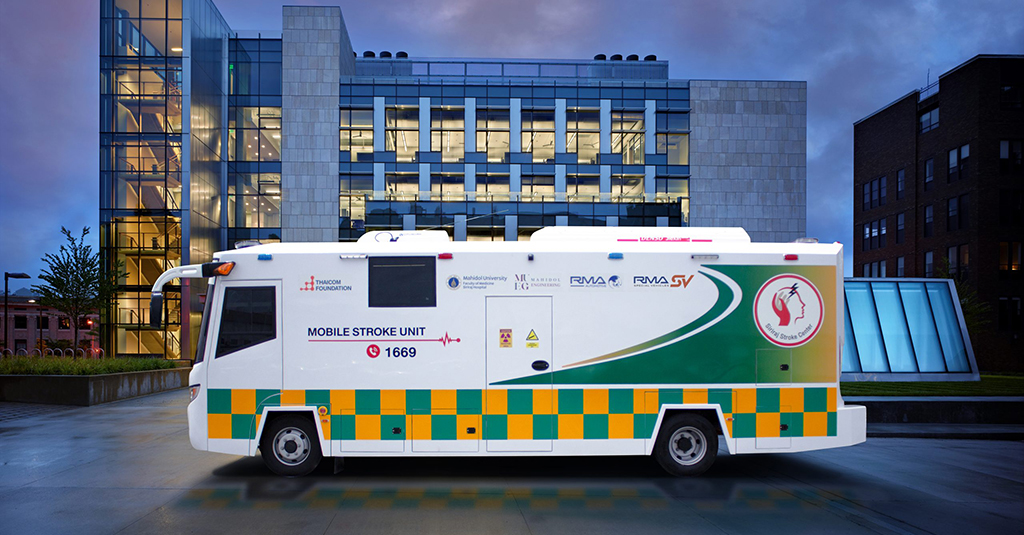 RMA Special Vehicles have developed a state-of-the-art Mobile Stroke Unit, one of three on order for Sirarj Hospital.

Thailand records about 50,000 deaths a year from stroke. Caused by an abrupt blockage of arteries leading to the brain, strokes are unpredictable, and their severity cannot always be ascertained at first glance. It is imperative that the patient receives medical attention as quickly as possible.

Jointly designed and engineered by RMA Automotive and Mahidol University, the Mobile Stroke Unit enables doctors to treat a stroke patient during the time critical window while transferring them to hospital. The Mobile Stroke Unit is fitted with a CT scanner, monitors and connections that link it to Siriraj Hospital, allowing neurologists immediately to begin attending to the patient.

Conceptualized by Siriraj Hospital, the objective of the collaboration between RMA Special Vehicles and Mahidol University was to create a new Mobile Stroke Unit that is better than the existing one in service. The vehicle had to be lighter, safer and more agile on the road. It had to be cleaner too and so for instance, battery  powered  generators were installed instead of polluting Diesel generators.

Development, planning and manufacture was done at the RMA Automotive Assembly and Distribution Center in Laem Chabang, Thailand. Led by engineering and product development team Wallop Sakulimsap,  Wichai  Jaiboon  and  Sureeporn  Nuchitprasittichai,  RMAA  engineers  designed  and  built  the  new  vehicle  from  the  ground  up,  paying  special  attention  to  the  use  of  light-weight  materials  to  keep  the  overall vehicle mass down.

In so doing the Mobile Stroke Unit retains the performance  and  handling  it  was  designed  with,  allowing  it nimbly  to cut  through traffic. A  front  engine  mounted  Mercedes-Benz  Sprinter  was  chosen,  so that more  weight could be placed over the rear axle. Besides the heavy medical equipment, the Medical Stroke Unit contains an examination area, shelving  and  storage. An insulated partition behind the driver’s cabin separates the medical practitioners from the patient area.

Further  weight  savings  were  achieved using a state-of-the-art  self-lifting stretcher in place of a hydraulic operated fitted stretcher hoist. The  first  Mobile  Stroke  Unit  was delivered to Siriraj  Hospital  in  September 2020, with a further two more units in production.